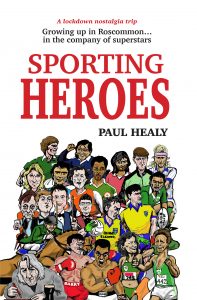 Describing the experience of writing the book as a ‘labour of love’, the author says: “Sporting Heroes is a ‘lockdown nostalgia trip’ into my youth in Rooskey and Strokestown, in which I reminisce on the huge influence on my generation of sporting heroes from around the world”.

This is an evocative journey into a bygone era, when there was no Internet, no social media, no 24-7 sport on TV, indeed very little live sport.

“In the 1970s and ‘80s and into the ‘90s we really cherished any live sport we saw” Paul recalls. “The FA Cup Final was absolutely unmissable! Likewise, we waited all year for the tennis from Wimbledon and for the world snooker from the Crucible Theatre. Those epic World Heavyweight Boxing bouts featuring legends such as Muhammad Ali, Joe Frazier and George Foreman – usually broadcast in the middle of the night, Irish-time – were magical too”.

The book is a series of personal and affectionate reflections by the author on sporting superstars from Ireland and abroad…including Bjorn Borg, Alex Higgins, George Best, Sonia O’Sullivan, Seve Ballesteros and Muhammad Ali.

Featuring eye-catching illustrations by Paraic Newman from Castlerea, ‘Sporting Heroes’ is an unashamedly sentimental trip down memory lane…in the company of sporting superstars. It’s on sale now in local bookshops.