‘There is light at the end of the tunnel’

Roscommon businesses are once again coming to terms with Level 5 lockdown as the Government confirmed yesterday (Wednesday) that schools will remain closed until the end of January and all non-essential construction will cease from 6 pm on Friday. 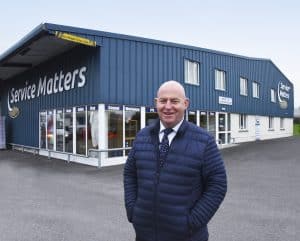 Vice-President of Roscommon Chamber, Vincent Collins, was critical of the Government’s handling of the crisis.

“It’s been a bit of a disaster and the reason (for repeated lockdowns), in my opinion, is that our health service cannot cope. Even before Covid-19 it wasn’t able to cope.

“The Government has not been leading from the front and there has been far too much chopping and changing in recent months. There should be a proper plan in place by now to deal with this,” he said.

Mr. Collins, who owns Service Matters in Roscommon town, added that he didn’t blame younger people for recent outbreaks and said restrictions have been too strict for many.

“To think that you can’t go and sit in a restaurant at a safe distance…I have land near Sliabh Bán and the Gardaí have been up advising people if they’re over their 5km. It’s hard on people when they can’t even get out and exercise,” he said.

Mr. Collins said that his own business had been badly hit by the pandemic.

“Most of the places we sell and lease our products to are closed…it’s like the weather, you can say what you want about this virus but it won’t make any difference.

“I’m fed up listening to the news, I just switch on some music now. The big question is how come our health service has not improved in the last six months?”

Strokestown Town Team Chairperson, Shane Lynskey, says there could be light at the end of the tunnel with the local roll-out of the Covid vaccine in coming weeks.

“People are getting on with it,” he said. “Our supermarkets and local services, such as the post office, remain open. Restaurants and pubs have had to close, but what choice do they have?

“It’s been a long spell but we’ve been through this before and there is light at the end of the tunnel with the vaccine being rolled out. People just need to keep to the rules for a while longer,” he said.

Mr. Lynskey said that the Christmas period had showcased the resilience of local communities.

“There was a great voluntary effort here over Christmas with the work the Christmas Lights committee did. We’re also lucky that we have Strokestown Demesne here which is a great facility for exercise for people living close by,” he said.

The situation is already looking brighter in Elphin, where the special events committee has decided to keep the town’s Christmas lights shining until the end of January.

Local councillor Valerie Byrne has called on other towns and villages to follow suit.

“The pubs, restaurants and retailers are closed so the idea of leaving our Christmas lights on is to give people’s spirits a lift. I’ve been in contact with councillors in other areas and I’m sure other towns will follow across Roscommon and hopefully throughout Ireland,” she said.

Cllr. Byrne said she hoped the Covid-19 situation would improve in coming months on account of the vaccine roll-out and the continued efforts of people across the county.

“Let’s hope that things change. Our lights are a symbol of hope and they will be a much-needed boost for morale in the coming weeks,” she concluded.