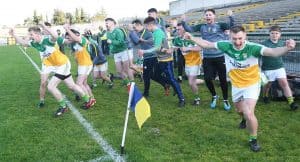 “Success seems to be largely a matter of hanging on after others have let go” is a quote from 19th century American author William Feather, and while it is most likely that he was not musing into the future about Oran footballers, it perfectly sums up their experience as Billy Donnellan’s men finally emerged from five years of agonising losses and bitter disappointment to claim the Jimmy Murray Cup after a thrilling decider that went to extra-time.

The 200 or so spectators who got in to see the game live in Dr. Hyde Park last Saturday were certainly lucky as they were treated to a cracking final between two talented and very well coached teams who gave everything on a day of almost perfect weather conditions.

In the end, Oran pulled away in extra-time, having survived a nerve-racking last few minutes in normal time. Oran’s fragile two-point lead turned into a one-point deficit when Darren Donnelly scored a penalty (after Daire Keenan was fouled) in the 3rd minute in injury-time. At that late stage it looked as if Tomás Gilleran’s men were to snatch the title right at the death – with Oran set to be denied in heartbreaking fashion once again.

But there was more drama to come. Oran were awarded a free a minute later, with Thomas Fetherston being fouled. The free was brought forward by referee Aaron Clogher (for dissent). Darragh Walsh’s effort from 32 metres out struck a post and was cleared. Oran’s chance appeared to be gone.

Then, in one last desperate attack, Kevin Concannon was fouled and young Charlie Carthy was faced with a very difficult free on the 13-metre line, out near the sideline. Showing composure that David Clifford or Dean Rock would be proud of, Carthy arrowed his kick over the bar, sending the game into extra-time. It was an extraordinary kick under pressure, one of the finest scores seen in a big game in the long history of Dr. Hyde Park. 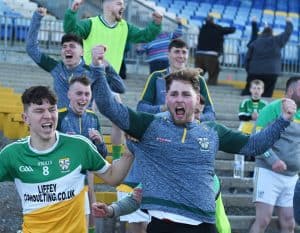 Having brought the game to extra-time, Oran finally found a route to pull away from a very brave Dominic’s side and it was fitting that it was the long-serving Mike Dwyer who sealed the win with a brilliant goal two minutes from the end.

Although Oran had the benefit of the very tricky breeze which was blowing towards the town goal, St. Dominic’s who were much the better team in the early stages. The Knockcroghery club rocked Oran back on their heels as early as the second minute. Tommy Hurley’s attempt at a point fell short but the outstanding Darren Donnelly was on hand to fist the ball to the net. St. Dominic’s were getting plenty of the ball and their defence was coping really well with the threat of the Oran attack. At half-time, and with the wind advantage to come, it was looking good for St. Dominic’s as they led by 1-3 to 0-5.

Oran, however, were much better on the restart. Thomas Fetherston and Cathal Kenny came thundering into the match. As the game progressed we knew that we have another classic contest on our hands. 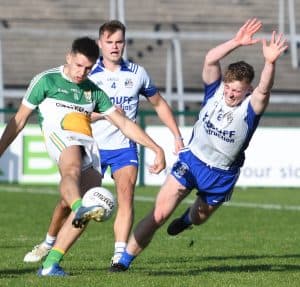 In the 36th minute Oran were ahead after a piece of footballing magic from Darragh Walsh. The centre-forward played an inch-perfect pass into the path of Charlie Carthy, who was upended. Cathal Kenny scored the resultant penalty and it put Oran three points ahead. It was as fine as pass as this writer has seen on a football field in many a long day.

From here to the finish it was a great contest. Micheal Byrne, Brendan O’Meara, Eoin McCormack, Daire Keenan and Darren Donnelly were outstanding for St. Dominic’s as they drove at Oran. But with Fetherston, Cathal Kenny, Charlie Carthy, Colin Walsh, Paul Kenny and sub Mike Dwyer playing crucial roles, Oran hung on to their narrow lead until injury-time. And now the drama was just about to begin, first with the St. Dominic’s penalty and then with Carthy’s ever so cool equaliser.

There was a skirmish at the final whistle which saw yellow cards shown to James Regan of Oran and Darren Dolan of St. Dominic’s. It meant that Dolan was off on a red, having been shown an earlier yellow. However Dominic’s were up to their full compliment of 15 players for extra-time. To be fair, it was never that type of game.

Oran pulled away in extra-time, with St. Dominic’s running out of steam and ideas. Yet it was only after Mike Dwyer’s excellent goal that Oran could finally relax and enjoy their win.

The eventual seven-point margin flattered Oran. When the disappointment eases this week, St. Dominic’s will realise that they contributed richly to a splendid final and they know that they have some wonderful young players who will surely be back at this stage of the competition in the next year or two.

But the day belonged to Oran, who have endured so much heartache over 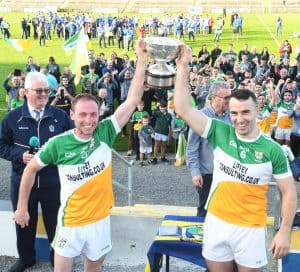 the recent past. The joy and excitement among the players and management and the hundred or so people from the parish that were there to see the match live was something to behold as Tom Fetherston and Mike Dwyer lifted the Jimmy Murray Cup into the skies on the steps of the stand at Dr. Hyde Park. It was a day and a championship that Oran people will never forget in this, the strangest of summers.