Creggs Rugby kicked off the new season with the first team winning away to Tuam last Sunday in the first round of the Cawley Cup. Having won the competition for the first time in 2018 and retained the trophy last year, Creggs are aiming to make it three-in-a-row this season.

The players have been busy with a gruelling pre-season training programme since mid-June while some of the squad have just returned after playing GAA throughout the summer.

Development continues at Creggs Rugby Football Club, and as well as boasting Connacht’s only 4G artificial pitch, the club caters for non-playing members and supporters with a new terrace and stand in place. It has also unveiled a new electronic scoreboard, in addition to putting a fully lit and tarmac-surfaced amenity walkway around the full facility.

Recently the club has applied for planning for four new state-of-the-art dressing rooms, including two reserved for ladies’ rugby, with individual changing cubicles and showers. The plan also includes a large first class gym, to be developed to highest professional team standards. 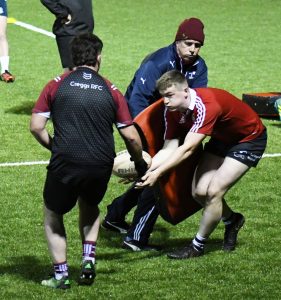 A strong finance committee will be working hard with members to fund-raise for their latest major project and adding more members to the successful Creggs Rugby Club Lotto is a priority for them.

On the playing front, on a typical Saturday morning, you could find up to 200 children, boys and girls from U-7s up to U-12s training with the oval ball.

Last Sunday, the club gave senior competitive senior debuts to six young players. As a consequence, the average age of the starting fifteen was under the age 21. That typifies the way Creggs Rugby is progressing and building for the future. The work being done year on year by all the youth level coaches and the head of youth rugby, Limerick native, Dave Purcell.

The adult squads include the first team, the Development team and U-20s. The first team plays in the top grade of junior rugby in Connacht, and have been rated second only to Connemara in J1A in the last two seasons, after gaining promotion the season previously.

The Development team plays in J1C and were in line for promotion earlier this year, when activity came to a premature end due to the pandemic lockdown.

Creggs has also experienced a resurgence in Girls Rugby in the last three years with great success at youth level. This season the club will field teams at U-14, U-16, and U-18. Great credit for this development rests with Dave Purcell and Micheal Glennon, the Creggs based Club and Community Regional Officer. 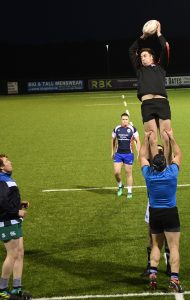 Creggs Rugby expects about 200 Mini Rugby boys and girls will return to training, playing and having fun next month and the club will field at all grades in Connacht Boy’s Youth Rugby from U-13s up to U-18s. The club will also support many primary and secondary schools with coaching and use of facilities including: Roscommon CBS, Roscommon Community College, Convent of Mercy, Roscommon, Coláiste Mhuire, Ballygar, and Glenamaddy Community School.

Padraic Deane, First Team Manager, said: “Creggs is developing on many levels. It is developing great facilities, great young people, great coaches, and a sustainable community-based club for the future. A large number of really good people are involved in coaching the growing numbers of players at the club. Equally there are very good people working extremely hard to fund the running costs and development of Creggs Rugby, and administering the fast-expanding club. It’s a great place for children, youths, and adults to involved in sport”.

He added: “It’s a privilege to work with everyone in Creggs. I’m lucky enough to be involved with a great crop of over 70 players and great coaches and we have the best of facilities and supports from the club for training and everything that required to field teams safely in the current climate. I believe that when the pandemic passes, that the spirit at play in Creggs RFC will ensure a stronger and even better club for all that are already involved and those yet to join in”.