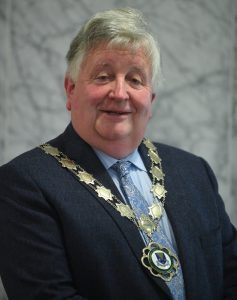 The new Cathaoirleach of Roscommon County Council, Cllr. Laurence Fallon, says there is great enthusiasm and determination among the people of Roscommon as the county exits lockdown.

The independent councillor was speaking after he was elected to succeed outgoing Cathaoirleach, Cllr. Paschal Fitzmaurice, at Monday’s AGM of the local authority.

“It feels great to achieve the (level of) Cathaoirleach of Roscommon County Council and it’s something all councillors aspire to during their time on the council,” said the Rahara councillor, whose nomination had been proposed by Cllr. Tom Crosby and seconded by Cllr. Orla Leyden.

“It is tragic that a lot of people have died of course and this pandemic and lockdown have come at a huge cost in terms of individual suffering for those who have lost income and been left without work.

“There is also the significant mental cost resulting from people being forced to live in lockdown conditions. However, I hope that we are now beginning to emerge from this crisis,” he said.

Cllr. Fallon said the financial impact on the local authority was not yet known and that some businesses in Co. Roscommon may not reopen.

“The impact on rates is quite substantial and I fear that there may be a number of businesses that may not reopen. There is a great deal of enthusiasm and determination there but people are being cautious,” he said before highlighting the financial supports on offer from the local authority.

“Roscommon County Council has been giving advice and offering support to businesses during this pandemic. I would ask people to be aware of the supports on offer such as the restart grant. There is quite a bit of funding available for businesses,” he said.

The new Cathaoirleach concluded by paying tribute to Cllr. Marty McDermott, who was selected as Leas-Cathaoirleach at Monday’s meeting.

“I am very happy for Marty. I have known him for a number of years and I have no doubt that he will be a great help to me as Leas-Cathaoirleach”.

Who are the politicians you admire? Going back quite a number of years, Mahatma Gandhi is someone I admire. There have been many politicians who have made significant contributions down through the years however. I would have worked with the late Liam Naughten and will always remember the effort and work he put in. The amount of work Denis Naughten did while in Government was also something to admire. The nature of this business is that you do receive a lot of criticism but there are not too many jobs where you have to secure your position every five years!

What is the biggest challenge facing a new Government? The first challenge is recovering from the effects of Covid-19 and getting the economy back on its feet, while also doing something about global warming. Marrying those two demands in such a way as to promote growth while also moving towards a greener economy will be a huge challenge.

What’s the best advice you’ve ever been given? “In a crisis count to three and think before you speak”.

What do you do to relax? I read a lot, mostly history and things like that. Being a farmer and being a public representative are two very different things so after meetings and work with the county council I find farming quite relaxing. Likewise, I find it a welcome break to work as a public representative after a hard day’s work on the farm. A change is as good as a rest!