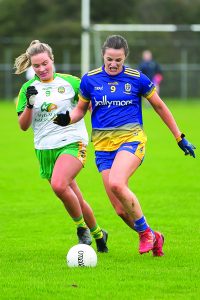 A strong final-quarter display, boosted by a number of important substitutions, saw Roscommon ladies through to an All-Ireland semi-final where they will meet neighbours Westmeath on the weekend of the 28th/29th November following this entertaining and very well contested round two game played at a cold and damp Kinnegad last Sunday.

Despite being the favourites to advance, it was only in the final 15 minutes that Roscommon pulled away from an Offaly side who proved very dangerous opponents throughout. However, the strength of the squad of players available to manager Michael Finneran was a key factor in what was a very hard-fought success.

The nine-point winning margin flattered Roscommon and does scant justice to the efforts of an impressive Offaly side for whom Kate Kenny was a constant threat at full-forward. However Roscommon were by far the more balanced outfit, while Offaly were too reliant on Kenny throughout.

There were nine goals scored in the game and there could have been at least five or six more as both sides missed some great chances, with both goalkeepers also making a number of top class saves. It was certainly not a match in which defences were on top. It was a cracking contest all through as both sides were totally committed to attacking football.

After Aimee O’Connor pointed an early free, Joanne Cregg blasted home Roscommon’s first goal in the 7th minute after a great run from Rachel Fitzmaurice. Offaly were back in business in the 11th minute when Kate Kenny was on hand to prod the ball to the net after a shot from Grainne Egan was saved by Helena Cummins.

Two fine points from the hard-working Laura Fleming (one free) saw Roscommon three ahead by the 16th minute, but Offaly struck for a second goal a minute later when Marie Byrne was on target.

The goal-fest continued in the 20th minute. Aimee O’Connor was quickest to react when the ball broke to her, putting Roscommon three ahead once again. Two points from Kenny narrowed the gap for Offaly before Sinead Glennon was on target with a fine point for Roscommon.

Then, in first-half injury-time, Offaly struck again when Ellie McEvoy scored a fine individual goal. When the sides went in for the break it was Offaly 3-2 Roscommon 2-4.

On the resumption, the pattern of the game continued. Points from Aimee O’Connor and Aoife Gavin saw Roscommon edge into the lead by the 39th minute. Two minutes later Offaly were ahead again when Grainne Egan scored her side’s fourth goal.

Pointed frees from Aimee O’Connor and Laura Fleming tied up the scores (2-8 to 4-2) by the 45th minute, the game hanging in the balance at that stage. Roscommon made a few crucial substitutions that swung the game in their favour in the final quarter.

Lisa O’Rourke, the Irish boxing international from Castlerea, Sarah McVeigh and Kate Nolan all made a big impact when they came on. Indeed it was O’Rourkle who scored an excellent goal in the 46th minute with almost her first touch. It gave Roscommon a bit of breathing space.

In the 50th minute Roscommon were awarded a fourth goal in controversial circumstances. While Sinead Glennon fisted the ball to the Offaly net, the referee and umpires adjudged that the ball was touched by goalkeeper Sinead Byrne on its way in, and the goal was given. Roscommon were now on a roll and the fifth goal arrived in injury-time when Glennon powered her way through to shoot low and hard to the Offaly net.

For Michael Finneran’s side, Roisin Wynne, Jenny Higgins, Laura Fleming, Rachel Fitzmaurice, Aimee O’Connor, Sinead Glennon and sub Lisa O’Rourke all stood out. However, the Roscommon team management will be working hard to shore up a number of defensive gaps that were very evident last Sunday in time for their big semi-final clash with the Lake County.

For Offaly, Ellie McEvoy, Grainne Egan and Marie Byrne all played well, while Kate Kenny was outstanding for the Faithful County and certainly did not deserve to be on the losing side.