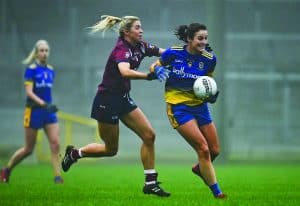 very tight championship game at this level. One of those elements is luck (and the need for a fair share of it). That’s the only area where Roscommon fell short in this thrilling All-Ireland semi-final played at Glennon Brothers Pearse Park last Sunday.

This magnificent Roscommon team could not really have done any more as they produced a display brimful of high-octane intensity, immense courage, fierce determination and a huge work ethic. It still wasn’t enough to overcome a dogged Westmeath side.

Michael Finneran’s team fought back from the concession of two very soft goals at both ends of the first half, and coming into the final ten minutes were within a point of their highly-rated opponents. The goal chance they needed to get them across the winning line never came. Furthermore, a couple of very controversial refereeing decisions went against them, especially towards the finish. 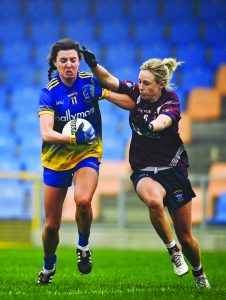 It was a heartbreaking defeat for the team, and indeed for manager Michael Finneran, who ends his four-year term in charge with this narrow loss. The progression in Roscommon ladies football is there for all to see and there are plenty of positives for the incoming manager Diane O’Hora to build on.

Westmeath were the strong favourites to advance to the final but they were given the fright of their lives by Roscommon on this cold, calm day.

They had a dream start too, netting a three-pointer after only 25 seconds. A free from midfield from Anna Jones came back off Roscommon goalkeeper Helena Cummins, Ciara Blundell poking the rebound to the net. To their credit, Roscommon put that setback on the back burner immediately and within ten minutes they were level. Outstanding attacking play yielded three frees, all converted by team captain Laura Fleming.

Jenny Higgins, Roisin Wynne, Natalie McHugh and Laura Fleming were driving Roscommon forward and Westmeath were struggling. In the 13th minute, Aimee O’Connor kicked a super score from 35 metres. Two minutes later Fleming kicked a delightful point after a sequence of eight passes. Points for Westmeath from Blundell and Johanna Maher levelled the scores by the 17th minute, but Roscommon were relentless, Joanne Cregg edging her side ahead with a fine point before the first ’water break’.

It was a great contest now. As the game slipped into first-half injury-time it was level at 1-5 to 0-8, the Roscommon scores coming from Aimee O’Connor and Laura Fleming frees.

However, Roscommon were to suffer another devastating blow just before the half-time whistle. Karen Hegarty’s weak shot didn’t appear to be much of a threat, but it sneaked inside Helena Cummins’ right-hand post for another soft goal. The same player followed up with a point from play to leave the half-time score Westmeath 2-6 Roscommon 0-8, a margin which, given the balance of play, certainly flattered the Lake County girls.

On the resumption, Roscommon responded magnificently once again. Points from Jenny Higgins (finishing a super team effort) and two Laura Fleming frees saw the margin down to one just five minutes into the half.

From there to the finish it was a fierce battle. Leona Archibold pointed from play for Westmeath in the 37th and 44th minutes, putting her side three ahead. But Roscommon refused to wilt and came back stronger than ever.

Michael Finneran sent for the cavalry, with Lisa O’Rourke, Rachel Fitzmaurice and Kate Nolan all coming on. Natalie McHugh kicked a fantastic point from distance in the 49th minute, and when Laura Fleming pointed from play in the 51st minute the lead was again down to one.

Roscommon were on the wrong end of a few very dubious refereeing calls towards the end of the game, especially one where Laura Fleming pointed a free before being ordered to have the kick retaken. Her second effort went wide. Then, in almost the next play, Westmeath sub Leanne Slevin pointed from 30 metres after a very soft free had been awarded.

Despite there being five minutes of injury-time, there was to be no further scoring and no fairytale ending to Michael Finneran’s stewardship of the team. But when Finneran reflects on his time in charge he will be very proud of the way his charges fought so hard against a team who were the hottest of hot favourites. It just wasn’t Roscommon’s day.

The future is bright for the ladies game in this county. The baton will now be handed over to Diane O’Hora who will have plenty to work with. We wish her the best of luck. Westmeath now play Meath in the final.