Those of us who marvelled at the performances of this magnificent young St. Brigid’s team in the championship this year should have trusted the evidence of our own eyes. I was one of many who knew that we were looking at a very special set of young footballers, but thought that this might be a year too soon for them to go all the way and actually lift the Fahey Cup. However, Benny O’Brien’s side showed last Sunday in Dr. Hyde Park that a new generation of footballers has indeed arrived on the Roscommon senior club football scene. Their time is now. 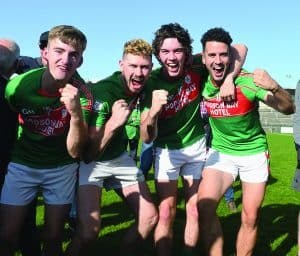 St. Brigid’s produced a scintillating second-half display to sweep aside defending champions Padraig Pearses, who never reached the heights that we saw when they won their first championship in 2019.

With two 17-year-olds amongst a group of eight U-20s in their side, St. Brigid’s came to Dr. Hyde Park with an ingrained confidence in their own ability after some outstanding displays en route to the decider. Pearses brought their experience and championship know-how, but their challenge never got off the ground and in truth they can have no complaints at the outcome.

On a perfect day weather-wise, with just a light breeze blowing towards the town goal, and with 200 people in attendance, the opening half was a tame enough affair with both sides playing a very tactical game in which holding on to possession was key. A lot of the play was lateral and scores were hard to come by.

Even in those early stages the signs were good for Brigid’s as they probed intelligently when they could, scoring some superb points. Eddie Nolan, Brian Derwin, Gearoid Cunniffe and Ruaidhri Fallon were all on target with memorable scores from play.

Paul McGrath, Peter Domican and Darragh Sheehy were excellent in defence, while further forward Brian Stack and Eddie Nolan won the battle at midfield against Niall and Conor Daly. 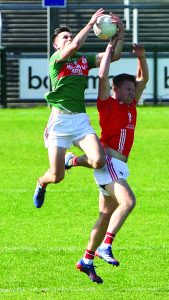 In attack, Brian Derwin, Ruaidhri Fallon, Gearoid Cunniffe and Eoin Sheehy were always a threat. Pearses were digging in and while they were struggling for form, they were well in touch on the scoreboard in the first half. However, they were too dependant on frees. The champions only managed one first-half point from play, and that was in injury-time from Hubert Darcy. St. Brigid’s led by 0-5 to 0-4 at the break.

Pearses remained in touch in the early stages of the second half but it was clear that St. Brigid’s were getting on top in almost every sector and the goal they were threatening to score arrived in the 42nd minute.

It was a cracking score too, with Fallon and McGrath centrally involved as Brian Stack powered through the centre to crash the ball past Paul Whelan. In a game like this, a five-point lead was always going to be decisive.

In the final quarter Pearses opted for the long ball into the St. Brigid’s square – hoping for a late dividend – but despite a few minor scares, James Martin, Peter Domican, Darragh Sheehy and Pearse Frost comfortably dealt with anything that the then champions had to throw at them.

It has been a sensational year for this young, well coached and very exciting St. Brigid’s team. The worry for all other clubs in the county is that this team is only going to get better. They have won the last four minor titles, and with Ruadhri Fallon and Ben O’Carroll on their team they are the hot favourites to make it five in a row when they face Padraig Pearses in the decider this coming weekend.

In this, the strangest of summers, it has been a great honour to have been able to attend the club championship and to see first-hand this very special St. Brigid’s team. It’s certainly the most exciting young team I have seen in many years.

Players like Ben O’Carroll, Ruadhri Fallon, Donnacha Gately, Brian Derwin, Ciaran Sugrue, Pearse Frost, Paul McGrath, Ruari Smith and Jack McDonnell have lit up this championship. When you add in the experience and class of Peter Domican, Eoin and Darragh Sheehy, Brian Stack, Eddie Nolan, Gearoid Cunniffe, Ronan Stack and James Martin, you realise it is a bewildering array of talent that is at the disposal of the Kiltoom-based club.

I am certainly looking forward to seeing many of these fantastic young players in the Primrose and Blue of Roscommon. I hope they stay playing football and if they do we will have the pleasure of watching them for years to come.

For Pearses, it was just not their day. When they look back at this championship they will be the first to realise that they never played with the same intensity that brought them their first ever title last year. They survived on instinct and championship know-how and got to the final using all their experience, which was a great achievement. But they were second best on the day. They will be back.

This day belonged to St. Brigid’s. It was the day the young guns came to town and laid down the law! They could be ruling the roost for many years to come.