Kilbride ladies’ team manager Ollie Lennon says his five-in-a-row stars may not be finished yet!

Moments after guiding the gifted team to a five-in-a-row in Ballyforan on Saturday, Ollie speculated that the all-conquering ladies may have more titles in their sights.

“Of course there’s more left in this group, but some of these girls have given great service to Kilbride, even before I came along. Nobody can go on forever but the decision will be with the girls. I always say to them to let them decide themselves when it finishes for them. From the club’s point of view, we’d love them to continue on.

“I hope they can sit back now and just look at their achievements over the last five years and then decide what they want to do,” he told People Sport. 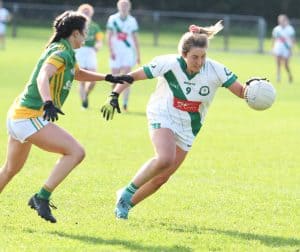 Kilbride were in devastating form as they dismantled Shannon Gaels at Ballyforan last Saturday afternoon to win their fifth Roscommon title in a row.

The Gaels had started well with captain Tess Murtagh slotting over following some patient build-up. They should have been further ahead by the seventh minute but Aishling McDermott’s fierce strike cannoned back off the crossbar following a great run by Christina Beirne.

Kilbride grew into the contest with player of the match, Fiona Tully, prominent throughout. It was Tully who levelled matters on ten minutes before Sorcha Bruen restored Shannon Gaels’ lead.

That lead was short-lived, however, as points from the very impressive Aisling Hanly (2, 1 free) and Sinéad Clabby put Kilbride in control. The champions stretched their lead further on 27 minutes when Tara Taylor’s sideline ball bounced over Shannon Gaels’ goalkeeper Aisling Egan and landed in the net.

There was still time for Sorcha Bruen to narrow the gap before the break but the momentum had irreversibly shifted in Kilbride’s favour. 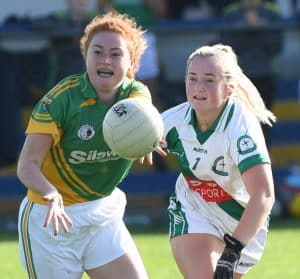 Ollie Lennon’s team made a blistering start to the second half, scoring four points without reply. Hanly converted another free before Eilish Fannon curled over a wonderful effort from a difficult angle. Fiona Tully then slalomed her way through the Gaels’ defence for a well-taken point before Tara Taylor slotted over a free.

To their credit, Shannon Gaels continued to attack and converted frees from Sorcha Bruen and Áine O’Dowd momentarily stemmed the Kilbride tide.

The game was over as a contest before the second-half water break however. Fiona Tully’s lung-busting run set up Eilish Fannon, who slotted to the net from close range before Hanly increased her tally with a well-struck point. O’Dowd responded for the Gaels but there was no let-up from Kilbride as they powered to victory in the final quarter.

Sinéad Clabby fired over twice with Emma O’Beirne responding for Shannon Gaels. Then Siobhán Tully’s superb hand pass played in Aisling Hanly, who showed great composure to find the net. Hanly then fired over another free before Aishling McDermott’s goal provided scant consolation for the Gaels.