‘Every time Tony McManus played, he oozed class. It was hard to take your eyes off him’ 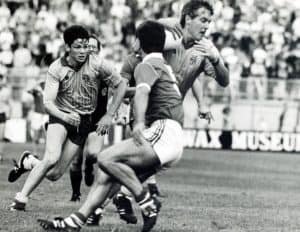 There was definitely a time when Roscommon’s Tony McManus was one of the very best forwards in the country. I’m just not sure which of three decades it was!

Maybe he was one of the best Gaelic footballers in the country in all three decades of his remarkable career – the 1970’s, ‘80’s and ‘90’s. Cliff Richard famously had No. 1s in about six decades; our Tony Mc had hits in three decades.

Just as I haven’t been an expert throughout this series – more, to paraphrase Eamon Dunphy, an unapologetic ‘fan with a typewriter’ – I’m not quite an expert on Tony McManus’ career. Well, not on its totality. I didn’t see him playing that often in the early years, certainly not at club level. But I caught up with him a lot in the late 1980’s and early ‘90’s, when – even as a veteran – he was still magnificent, still the leader for both Clann and Roscommon.

It’s amazing, looking back, how long he played at the very top. He won an All-Ireland U-21 medal in 1978. Eleven years later, he won an All-Star. Thirteen years after ’78, he won a (second successive) Connacht title, and played in another All-Ireland Senior Football semi-final. Sixteen years after first playing championship for the county seniors in 1977, he was still playing for Roscommon. Sixteen successive seasons!

Naturally, by the very end, Tony had slowed, but the craft and wiliness was still there, the football brain orchestrating much of the play. He was still the ‘go to’ man in the Roscommon team. And every time he played, he oozed class. It was hard to take your eyes off him.

I was very young when Tony Mc and Dermot Earley and their teammates were winning four Connacht titles in a row (1977-’80), while inching achingly close to the feats of Jimmy Murray and the men of 1943/’44.

I was at three of those Connacht finals. Magical days. Crepe caps, class team. Time passed. After working for a couple of years as a sports reporter in Cavan, I ‘transferred’ to the Roscommon Champion in 1988. My first port of call was hurling in Athleague. I soon learnt about the might of Four Roads. And very soon I discovered that covering club football in Roscommon would be almost all about the magnificent Clann na nGael.

Over the next few years, I followed Clann around the country. They routinely destroyed all-comers in Roscommon, also dominating Connacht. They had a few stars, but mostly Clann were a great team. Incredibly, Clann won ten county titles in eleven years (1981-1991) and six Connacht titles in a row. In all, McManus collected an amazing 14 county senior medals. At Clann, he was not alone in collecting multiple honours. Sadly, cruelly really, All-Ireland club success eluded Tony and Clann; they reached five finals, falling at that last hurdle each time. Sport often scoffs at our notions of what is fair, what is deserved.

I enjoyed covering those Clann years (the much-missed Donie Shine Senior was their manager at the time). The one-sided demolition jobs in Roscommon were becoming boring for neutrals…and were hardly particularly healthy for football here, even if one always had to admire Clann’s class, ruthlessness, and extraordinary hunger. Much more memorable were some great performances in Connacht and in All-Ireland semi-finals. More often than not, Tony Mc starred. He was a consistent scorer, a born leader, a player who detested defeat. As such, he was more than happy to get his hands dirty. Great workrate. He had remarkable dedication and commitment. Hence the long career.

Fans will always remember the great scores, the trademark McManus dummy, the touches of class…also how he simply never gave up, even when the scoreboard bore a grim message. It wasn’t unusual to see him foraging for possession/helping out, deep in his own half. I remember one famous Clann win against Burren. It was a bitterly cold day, the pitch bathed in snowflakes. From the press box, we could barely see the players. We could just about make them out. Clann had many warriors who excelled in that epic battle, but I particularly remember Tony coming deep, in defence one minute, then midfield, then attack, linking the play, eking victory through sheer will and hunger and craft, Clann masterful and heroic, prevailing over man and snow.

Somehow, the Gods (aided by Nemo Rangers and others) decreed that Clann wouldn’t win that All-Ireland. So be it. We cannot tamper with the history books, but neither can hard luck tarnish the memory of what we saw, of how good they were. Meanwhile, what can one say about Tony McManus’ inter-county career? It was remarkable.

He won those four Connacht seniors as a very young man – ’77 to ’80 inclusive. The run he made to set up the Roscommon goal in the first minute of the 1980 All-Ireland final is timeless, a thing of beauty, while also a teasing reminder of what might have been.

After the huge disappointment of that All-Ireland final defeat to Kerry, many of Tony’s teammates drifted away, entirely understandably. The dream was dead. McManus soldiered on. A great player showing what it’s like to be a great, loyal servant. Year after year, he excelled in that Roscommon attack, earning the respect and admiration of GAA people all over the country. But they were barren years at inter-county level. In the Roscommon Champion, I labelled the eighties’ Roscommon’s ‘Decade of despair’.

Finally, by 1989, Martin McDermott had built a very good team and still had the talisman up front. In the Connacht Final, Mayo (eventual All-Ireland finalists that year) and Roscommon drew. The replay in the Hyde was a thriller. A full house. McManus scored two goals. His second, a superb penalty, put Roscommon ahead by a point in the dying seconds. Tony directed colleagues to mark up as Mayo made a quick restart. But his plea went unanswered. Mayo broke upfield, levelled, and brought the game to extra-time. Roscommon dominated, only for Jimmy Bourke to scramble a horrible, ugly, heartbreaking sickener of a soft goal over the line!

But Roscommon, with the now-veteran McManus still hurting defences, were going places. Aged 32, Tony won a richly deserved, overdue All Star that year. And McDermott’s team won the 1990 Connacht final. (Cork beat Roscommon by seven in the All-Ireland semi-final). Roscommon retained Connacht in 1991 (under McDermott), running Meath to a point in the All-Ireland semi-final. Another one that got away.

Tony Mc finally retired in 1993. He won six Connacht titles in his career, and a National League winner’s medal (in 1979 v Cork). These, allied to multiple honours with Clann, three Sigerson Cups with UCD, and that All-Ireland U-21 title in 1978 against a Kerry team laced with young men who would become senior legends.

Throughout that long, distinguished career, McManus was recognised as one of the outstanding forwards of the era.

Twisted blood, dummies to die for

There were virtuoso scores and performances that I never saw, others that I did. I recall a day (was it against Meath in that NFL game in Kiltoom, when it rained almost biblically?) when he scored 1-5 from his total of six shots in the entire game. In 1990, in a National League quarter-final in Portlaoise (rather like George Best against Chelsea’s Ken Shellito) he gave Dublin’s Noel McCaffrey twisted blood. In a classic game (won by Roscommon) Tony scored 2-5, McCaffrey hung out to dry on a summer’s day.

It’s no harm to meet our heroes. In Down the Hatch (the well-known ‘GAA pub’ in Roscommon) and elsewhere, we bump into Tony every now and again (well, pre-Covid) and we’re always transported back to when his greatness graced the grass.

First, the magical 1977-’80 team. Then, the quietly heroic soldiering in the wilderness years, McManus alternating between fruitless campaigns with the county and glory with club.

Then, when Roscommon blossomed again – that fine team of ’89-’91 – Tony was royalty up front. Good times had come again. Two Connacht titles. For a while, he broke Leitrim hearts year on year, Tony often the main difference between the teams in tight derbies (remember, Leitrim had a fine team then, winning Connacht in ’94).

Yes, it was hard to take your eyes off him. He was generally at corner-forward, but he could pop up anywhere. He took the ball, chest-high (having pointed to where he wanted it). He hardly ever wasted it. He scored, or he passed, or he won a free. He was some man to draw a free! He scored inspirational points. Blessed with great balance, he soloed artistically. He had a dummy to die for. He could turn defenders inside out and was clinical with his finishing.

Gifted, oozing class, fiercely committed, and with an extraordinarily long career – one marked by both glory and broken dreams – Tony McManus was a distinguished prince of footballers, a Roscommon hero always.

Footnote: One Sunday in the early ‘90’s, after the now-veteran McManus had broken Leitrim hearts (again) in a championship game in Carrick, four or five of us found a quiet bar in the town. Fresh from his handiwork, Tony Mc joined us, as had been arranged. One of our party told the old Leitrim lady behind the counter that this was Tony McManus. For a moment I wasn’t sure if she was going to hero-worship him, or hire a hitman. After a pause, she smiled and sighed. “So you’re the fella that keeps tormenting us!” Our very own football hitman smiled back.